Some hate them, some love them, but we can’t deny that garbage disposals are a useful tool to have in any home. Garburator have a bad reputation for causing issues, but technological advancements have made new garburator more reliable than ever. If you live in the Lower Mainland, Fraser Valley or Greater Vancouver Area or own a business here, you may be considering a garburator or already own one. In this blog, Mr. Swirl, the Friendly Plumber will break down everything you need to know, whether you own one, or are looking to purchase one. 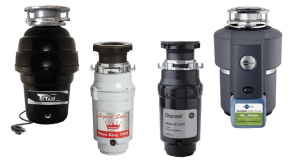 How Does a Garbage Disposal Work?

We’ve all heard of garburators and garbage disposals, but how do they actually work? Well, a garburator looks like a large drum that is plumbed in right beneath your sink and attached to its pipes. Anything that goes down your sink drain will pass directly through the garbage disposal. At the top of the drum there is a chamber with a strainer-like filter on the bottom.

Any liquids or small particles will pass straight through this filter and out of the garbage disposal’s first chamber. If you have a garburator, you can put larger food items down your drain, which will then get caught in this first chamber. In the solid waste chamber there is a larger impeller with big blades.

Contrary to most thoughts, these blades are not actually sharp. They use blunt force to grind and smash the waste against the walls of the garburator. Once the waste has been grinded to a small enough size, it will pass through the filter at the bottom of the solid waste chamber. From here, all the water and small waste particles will enter the normal plumbing system. Garbage disposals are a simple contraption, but quite handy for disposing of small food waste.

Although your garburator is pretty powerful, they can’t handle everything!

What you Can and Can Not put in Your Garbage Disposal

Since your garbage disposal is directly connected to your drains and sink plumbing, you’ll see many of the same symptoms of a clogged drain or leaking pipe. Some early detectable signs of problems with your garbage disposal are excessive grinding noises that aren’t usual or water backing up in your sink and drain.

The most common problem with garbage disposals is a jam. Jammed garbage disposals are caused by the solid waste chamber not draining properly and becoming backed up from improper use or neglect. Jams will cause you to have a clogged sink drain which nobody likes. We recommend hiring a friendly Mr. Swirl plumber from Coquitlam or Maple Ridge to help you out with your clogged drain and garburator. However if you wish to deal with the matter in your own hands, it is possible.

On most garburator units there is a small hole on the bottom where you can unscrew the trap door and access the solid waste chamber. If you can see the blockage, do not stick your hands right in the impeller, instead use the tool of your choice to reach in the chamber and remove the blockage.

If you leave a blockage or jam unresolved it will lead to the motor inside your garbage disposal burning out. If your motor burns out, your best bet will likely be to get a garbage disposal replacement. In any instance, if there is an issue with your garbage disposal we highly recommend getting a trained professional Mr. Swirl plumber to check it out. We can solve your garbage disposal issue faster and more reliably than most homeowners and at a better price than other plumbers in Coquitlam, Maple Ridge, Pitt Meadows, Poco or the whole Lower Mainland.

Choosing the Best Garbage Disposal for You

There are few factors that will help decide the right garbage disposal unit for you. On your end, it will depend on your usage rate, amount of users, available space and cost. The factors you have to choose from in garburators are size, power, material, insulation and noise level. There is a large variety of garburator on the market and any mix of these factors likely exists.

We hope with the help of this guide, you’re now a garburator expert! Whether you’re doing a renovation, moving into a new home or upgrading, garburator are a great tool to have. Mr. Swirl is here to help you with garbage disposals and you can ask us anything when it comes to them. We service Port Moody, Pitt Meadows, Poco, New West, Burnaby, Maple Ridge, Surrey, Coquitlam, Mission, Langley, Vancouver and the whole Lower Mainland, Fraser Valley and Greater Vancouver Area. If you live in this area and require garburator assistance give us a ring at 604-435-4665 or book us online now!