At this point you might be wondering, what is Poly B? The answer could be shocking if you live in the Lower Mainland, Greater Vancouver Area or Fraser Valley and your home was built between the years of 1970 & 1999.

Poly B or Polybutylene piping was created to be an alternative to expensive copper piping in homes. It was popular and heavily used in 1970 to 1999 for the construction of homes in cities such as Burnaby, Coquitlam and Langley due to its inexpensive price. However, home constructors didn’t know the damage they were doing at the time. Truth be told the pipe leaks all the time! Its notorious for having huge leaks, bursts and causing you all sorts of problems. We’ll let you know all the reasons why this happens as it is one of the most common issues plumbers in the Lower Mainland, Greater Vancouver Area and Fraser Valley face. 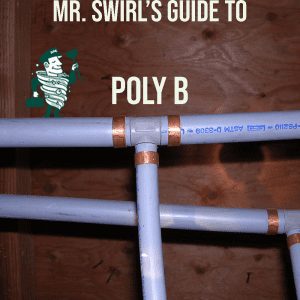 Why does Poly B leak so much?

Unfortunately, there are many reasons why the pipe leaks so much. Here are just a few:

-Heat: If the pipe has been installed in an area that often becomes hot like next to a gas hot water tank or water heater the excessive heat can cause the pipes to burst or leak.

-Fittings: When the pipe was first installed, often all the fittings were made from plastic. Plastic, similar to the pipe, is cheap but it does not hold up. These fittings can break or become loose creating large bursts or leaks.

-Installation: Since the pipe was essentially a phase in plumbing and construction, installation of the piping was never mastered. Piping that was installed over 30 years ago can often leak from a pure bad installation.

-Stress: Plastic is not near as durable as copper or brass, and this becomes evident in the case of the pipe. High water pressure can often cause a burst or leak in the pipe.

-Deterioration: When the pipe is used directly with tap water it causes a reaction between the chlorine in water and the pipe material. This reaction leaves Poly B very brittle and eventually will cause cracks leading to leaks.

Some other issues with Poly B are:

-Lifespan: Due to the various factors causing leaks in Poly B, their lifetime ultimately becomes very short. On average most Poly B pipes will start to leak after only 8-9 years.

-Sunlight: If for some reason you have Poly B Piping outdoors, sunlight can be very damaging and cause it to deteriorate and crack.

-Insurance: If you live in the Lower Mainland, Greater Vancouver Area or Fraser Valley and experience Poly B leaks, the majority of insurance companies won’t support you. Insurance companies have special rules around homes with the pipe which will drive up the price of your premium or leave you with no insurance at all!

-Home Value: That’s right! Poly B can even cause the price of your home to go down or make it difficult to sell. As more people learn about the pipe, it becomes harder to sell a home with Poly B in it.

Signs to look out for in Poly B

If your home has Poly B in it, you should definitely know and have some concerns. Poly B is generally grey in colour but as it deteriorates it often turns white and begins to crack. If you notice this in your Poly B, as well as plastic fittings, or it being installed in a high temperature area call Mr. Swirl immediately before a serious leak occurs.

Even if your Poly B is showing no serious symptoms, we’d recommend having a friendly Mr. Swirl plumber in Coquitlam, Burnaby, Mission or wherever you reside come assess your piping. Furthermore, at Mr. Swirl, we understand that this in an unavoidable problem and don’t charge a regular service fee.

-Changing the fittings: Plastic Poly B fittings will become a headache and cause leaks. The number 1 fix to plastic fittings is getting them changed to copper or brass.

-Crimping: A lot of metal bands around the pipes were over crimped when installed and an important preventative step is to redo these bands with less crimping.

-Changing the pressure: Since high pressure is a large contributor to leaking pipes, an effective step to preventing the pipe leaks is to actually lower the pressure in your fixtures to between 40 and 60psi.

-Chlorine Filters: If you live in the Lower Mainland it could be possible that you live in an area with high chlorine levels. If this is the case, a chlorine filter will reduce the reaction between chlorine and Poly B causing its breakdown.

-Lowering your Temperature: If you have the pipe in your home, the surrounding temperature is also a big factor towards its failure. If it is installed close by to a hot water tank or water heater you can lower the temperature to prevent Poly B from leaking. However, you need to be careful as it is recommended that you lower it to no more than 55 degrees Celsius, any lower than this could cause bacteria build-up.

What Should I do if my Home has Poly B?

Call Mr. Swirl, the friendly plumber immediately! Poly B is such a common issue and we hate the problems it causes you. Have us assess your house’ pipes whenever is best for you, we’re open 24/7. So if you live in Coquitlam, Port Coquitlam, Pitt Meadows, Maple Ridge, Surrey, Langley, Port Moody, Burnaby, Mission, New Westminster, the Greater Vancouver Area or the Fraser Valley and your home has Poly B give us ring on our 24/7 phone line at 604.435.4664.