Repipe Your House Today! Be Cautious of Poly B Piping! 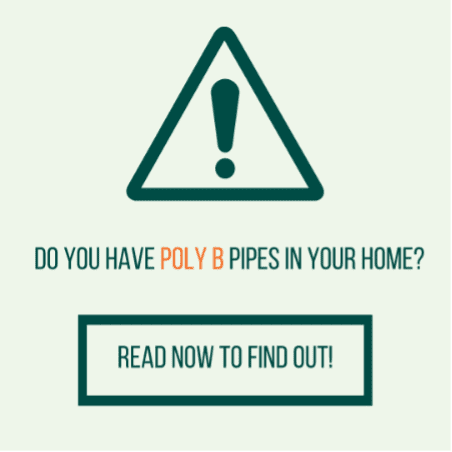 Whether you are currently a homeowner or thinking of buying a home in the future, you should look for signs of Poly B piping and replace it as soon as possible. The potential damages can be very costly. What is Poly B plumbing you may ask? Check out our previous blog post here for a detailed explanation of Poly B. Also known as polybutylene piping, Poly B fittings and plumbing are a cheaper alternative to copper piping that was commonly used throughout the 1970s until the end of the 1990s.

Why is it important right now?

A key factor is the age of your house. If your house was built between the 70s and 90s, when Poly B piping was used throughout the Lower Mainland, Greater Vancouver Area, and Fraser Valley, your house may be at imminent risk of a leak! We highly recommend you call Mr. Swirl, the friendly plumber, to immediately book a repiping service.

The lifespan of Poly B pipes is on average 8-9 years, meaning the piping in your house has already outlived its lifespan. Furthermore, the pipes are easily damageable and prone to leaks due to the nature of the plastic material of pipes not closely bonding. When Poly B is used in hot water systems and residential plumbing, the water temperature can deteriorate the insides of the pipes and cause the plastic to crack and fail over time.

The Vancouver region has experienced more extreme summers and winters lately than ever recorded, and there is more hazardous weather in the coming seasons. It is essential to get your house’s piping system inspected to prevent any unexpected water damage.

Complications Caused by Poly B Piping Besides the Water Damage

Poly B product was officially banned in 2005 following the National Plumbing Code’s recognition of the structural damage done to properties where it was used. The ban was the result of several cases and lawsuits reporting damage, some occurring even as early as several months after the installation of the pipes. The water damage reported affected many homes’ foundations, drywall, flooring, and even appliances and furniture. This pattern led to multiple class-action lawsuits against the Poly B piping, resulting in a combination of multibillion-dollar lawsuits.

The damages of the poly b plumbing problems and leaks go beyond just the leakage, water damage, and flooding. Due to the nature and lifespan of the material, they’re bound to crack over time, and when they do, your insurance would most likely not cover the cost of the water damage to your house.

The insurance companies handling these initial cases experienced significant losses as Poly B pipes were prone to leaking and caused water damage much more often than expected. Thus, in 2005 when the ban was introduced on Poly B pipes, insurance companies stopped insuring houses with Poly B piping due to liability. In instances where insurance companies did offer to insure a property with Poly B, there were several clauses, conditions, and premiums charged if an accident did occur. Even with insurance, it would cost homeowners more to fix the damage than it would have to repipe preventively.

It is important to note that most current home insurances providers do not cover damages caused by Poly B as they are highly breakable, prone to failure, and a large liability. Mr. Swirl highly recommends you check the piping of your owned home. If you find any Poly B pipes or plastic fittings, call Mr. Swirl today to book a service to get them fixed before you experience a leak or water damage.

Poly B Signs to Look For…

Light gray plastic pipes in exposed areas such as under your bathroom and kitchen sink. You may notice the pipes have already started to bend and become discoloured. In either case, call Mr. Swirl now to save yourself from the headache and costly damage of a water leak in your home.

Your Poly B plumbing may fail faster if you…

Use extremely high-water temperature, as the temperature is one of the main causes of rapid failure in Poly B pipes, causing them to leak, or even burst.

Use high water pressure, as the stress caused by the water pressure on the plastic can bend and crack the inflexible nature of the pipes.

Have plastic pipe fittings, like the material of the pipe itself, are very easily breakable or loosening.

Live in a high chlorine region, as the reaction between Poly B’s inner layer and the chlorine in your water causes high deterioration and leaves pipes very brittle and cracked.

Had a bad installation, such as over-crimping and straining the plastic with too much pressure, causing immediate leaks.

What Should You Do?

Overall, the above examples are not the only causes of Poly B failure as it can be a combination of all aspects, or another reason completely. Whether or not your home falls under the scope of the considerations mentioned above, we strongly recommend you check your pipes and contact Mr. Swirl for any of your home piping and repiping needs. Avoid poly b replacement costs, or worse both plumbing and structural damage costs.

Our goal here at Mr. Swirl is to help make your day better. Not having to deal with leaky pipes in the homes you put your hard-earned money and time into is how we can help. Call Mr. Swirl, the friendly plumber today at 604-435-4664, our 24/7 phone line. We are available for repiping services to prevent water damage, the headache of dealing with the insurance companies, and the costly structural impact.

How long does it take to repipe a house?

Depending on the size of the house, a repipe can take between two to five days to complete. Mr. Swirl’s team is fast and efficient and ensures you won’t have to wait longer than you need to.

How much does it cost to repipe an entire house?

Do I have to leave my home during a repipe?

Not if you choose not to. During a repipe, we cover all the furniture and appliances to ensure that they stay in a good condition while we repipe the house. Mr. Swirl’s team ensures that you have running water in at least one bathroom by the end of each day in order to enable you to stay in your home while the repipe is happening.

Will I have water during a repipe?

Not during the day when the project is taking place. This means from the morning until the end of the day, the water is shut off to allow the technicians to repipe the house. However, the water goes back on at nighttime.

Is it worth it to repipe an old house?

Yes, it adds a significant value to the house, and increases its sale price.